Today I took a day off work to do a few things with the family.

We needed to go to a special store in Goderich to pick up some homeschooling materials. Goderich is known as “the prettiest town in Canada” and it’s just about an hour’s drive from our house.

Goderich also happens to be by lake Huron, so we also thought of getting lunch and trying the beach.

The Learning House is a treasure for homeschoolers. This Christian-flavoured shop carries tons of books, learning kits, DVDs, toys, and more. The staff was super friendly and we were able to pick up a few things for our family and a few other families from London.

While at the store, I asked them if they’d recommend a place to eat in Goderich, since it was almost lunch time. They were able to suggest a couple of places, and I chose a place called West Street Willy’s. 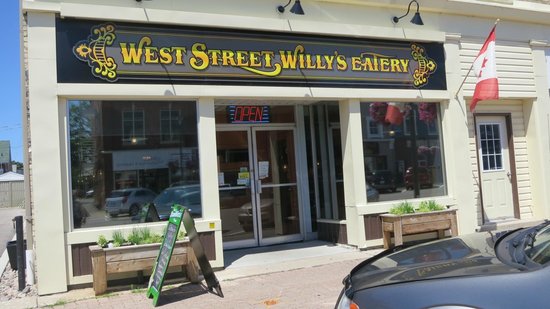 Despite being a Thursday, the place was full. The food was just OK and took waay too long to come (about 40 minutes from the time we walked in to the time we got our food). Though it was mostly OK, next time we are in Goderich we will try the other place suggested to us at the Learning House.

Goderich is a pretty, pretty place! It’s right up against Lake Huron and it has a quaint central town square where the courthouse sits.

In 2011 it was hit by a tornado that really tore up a lot of the historical buildings. I was sailing Lake Huron with the Navy around that time and was able to visit Goderich about 3 weeks after the disaster. It was a sad sight. But since then they’ve been able to rebuild and the town is looking great again.

Here are some pictures we took:

Kids playing on the stage at the town square:

After visiting the town we quickly went to the lake to take a peek, but had to leave because it started to rain.

Instead, we drove down the coast to the beach town of Grand Bend, where we were able to hit the beach for about 30 minutes before the rain started again.

There was a weird blueish hue in the water toward the horizon. The pictures don’t do it justice:

After that, we hit the local Tim Hortons for a couple of coffees and timbits to go, and drove home.

There’s so much to do and see around here, and it’s great to take a day off every once in a while to explore.